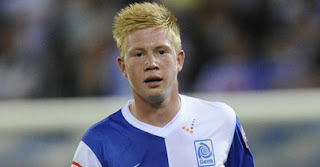 Belgian midfielder Kevin de Bruyne hopes a deal can be agreed to take him to Chelsea after claiming that talks are underway over a move. The highly-rated 20-year-old, who has already represented his country at senior international level, helped Genk to the Belgian title last season. He has been linked with a switch to Stamford Bridge for much of the summer and it now appears the Blues have stepped up their interest. De Bruyne says talks are progressing well and he is optimistic an agreement can be reached. Genk have previously stated they would not allow Chelsea to send De Bruyne out on loan to one of their domestic rivals, after reports suggested he might go to Anderlecht to smooth over the Blues' move for Romelu Lukaku. De Bruyne insists he would have no problem with returning to Genk for another 12 months, having spent his entire professional career with the club.
Email ThisBlogThis!Share to TwitterShare to FacebookShare to Pinterest