Could Drogba be on his way to Arsenal or Spurs? 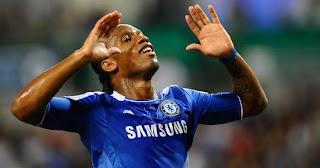 Murmours across the internet are claiming that Didier Drogba could be on his way to either Arsenal or Tottenham Hotspur. The 33 year old striker has had contract talks stall over recent days, with Chelsea manager Andre Villas Boas suggesting he is not aware of the strikers future. There are reports that claim Drogba is still not at ease with the fact that Fernando Torres' inability to find the net still warrants the Spaniard a favoured starting spot. Chelsea are still looking to sign Tottenham midfielder Luka Modric, despite agreeing a deal for Juan Mata, and there is suggestion that Drogba could be used as part of a deal that brings the Crotian to Stamford Bridge. Although Yossi Benayoun has been strongly linked in a similar way. Arsenal meanwhile are under pressure from their own fans to bring in some experienced quality with many fans believing a two year deal for Drogba would add the support Robin van Persie requires. Whether anything materialises from these rumours will surely be known in the coming days.
Email ThisBlogThis!Share to TwitterShare to FacebookShare to Pinterest