Chelsea and Valencia close to agreement on Mata‎ 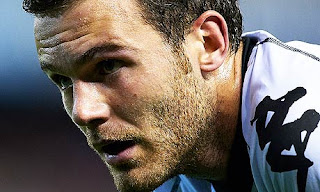 Chelsea are on the brink of sealing a £26m deal for Juan Mata, the 23-year-old Valencia winger who has previously been a long-term target for Arsenal this season. The deal was understood to have been close to completion last night, for £23.4m and £2.6m in add-ons, with lawyers finalising details today. He should sign a five-year contract at Stamford Bridge. Andre Villas-Boas had admitted this week: "we might just add a number in midfield." The expectation was that there was a club statement imminent from Valencia. Mata is most commonly compared to the former Valencia midfielder David Silva, now at Manchester City, and plays in the three behind the striker. The 23-year-old, who has studied at university and speaks reasonable English, has long been open to a move to the Premier League.
Email ThisBlogThis!Share to TwitterShare to FacebookShare to Pinterest