Cech out for up to four weeks 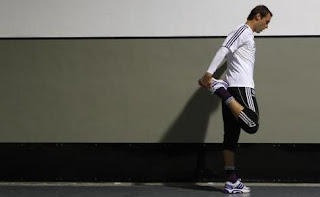 Chelsea have announced that goalkeeper Petr Cech will be out for three to four weeks after sustaining a knee injury. Cech fell awkwardly at the end of Wednesday's session and scans later revealed the Czech Republic international had suffered medial ligament damage. Chelsea have loaned goalkeeper Thibaut Courtois, signed from Genk this summer, to Atletico Madrid, so Villas-Boas will have to call on either Ross Turnbull, who signed from Middlesbrough in 2009, or veteran Portuguese goalkeeper Henrique Hilario for Saturday's match at West Brom. Cech will also miss the following weekend's Premier League match against newly-promoted Norwich but the international break means the 29-year-old could return against Sunderland on September 10, with trip to Old Trafford to face Manchester United the following weekend.
Email ThisBlogThis!Share to TwitterShare to FacebookShare to Pinterest