Boss will rely on ageing squad in pursuit of title 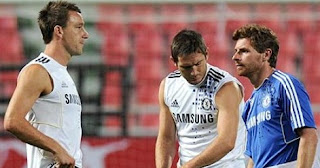 With Andre Villas-Boas (seemingly) staying out of the transfer market, Chelsea embark on their bid to lever the Premier League title from Manchester United with the same ageing squad that underperformed in a trophy-less campaign last season. Villas-Boas does bring a freshness and dynamism to the London club that appeared stale and in need of reinvigoration. However, despite having money to spend, the Portuguese coach has, so far, brought in just two signings; goalkeeper Thibaut Courtois and midfielder Oriol Romeu - choosing instead to sit tight and assess the merits of the players he inherited. There are concerns that key players John Terry, Frank Lampard and Didier Drogba are entering the twilight of their successful careers, but Villas-Boas is prepared to keep faith in a trio that has been the backbone of the team for the past seven years. Terry, Lampard and Drogba are sure to remain influential members of the dressing room but Villas-Boas needs other high-profile players to step up.

One of those players is Fernando Torres, who scored just one goal in 18 games after his £50m transfer from Liverpool in January. Whether to start Torres on his own or play him alongside Drogba was a quandary that proved beyond Carlo Ancelotti, who was fired at the end of his second season in charge despite winning the league and FA Cup double in his first year. It is a dilemma Villas-Boas needs to solve quickly if the goals are to flow this season. How much of a role Nicolas Anelka or Salomon Kalou will play in this remains unknown. As does the input of talented England U21 striker Daniel Sturridge - full of spark and hunger during the recent Asia tour.

A lack of creativity in midfield is also a concern for the new manager. Heavily linked with a raid on former club FC Porto for Portugal midfielder Joao Moutinho, Villas-Boas has also been unsuccessful in a summer move for Tottenham playmaker Luka Modric, indicating his desire to add some imagination to that department. With Michael Essien not set to return until the start of 2012 because of a knee injury, John Obi Mikel is likely to assume the holding-role duties and will look to impose more of an influence than he did last season.

Not only is there pressure on Villas-Boas to bring immediate silverware to Stamford Bridge, he must do so in stylish fashion - just as he vowed the week after he took over. With such fierce competition at the top of the league, winning the title will be harder then ever this season. However, he showed last year at Porto - where he won the league, cup and Europa League in an unbeaten season - that he is a coach of rare quality. And after the glory years of Jose Mourinho, Villas-Boas' mentor, Chelsea fans will hope another golden era is just around the corner.
Email ThisBlogThis!Share to TwitterShare to FacebookShare to Pinterest