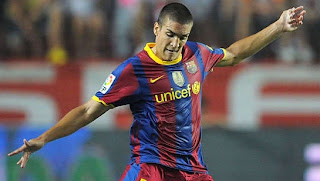 Andre Villas-Boas is closing in on his second signing, after Barcelona youngster Oriol Romeu confirmed his agent has held talks with the Blues over a proposed summer switch to Stamford Bridge. The highly rated 19-year-old Spaniard plies his trade primarily as a defensive midfielder, and could come in as cover for the injured Michael Essien who was ruled out for at least six months after suffering a cruciate ligament injury on the first day of pre-season training. Chelsea confirmed last month that negotiations had taken place with Barcelona over the transfer of Romeu, with a fee believed to be in the region £5million said to have been agreed between the two clubs. Speaking to Spanish publication AS, the talented midfielder confirmed Blues’ interest. "Barcelona and Chelsea have already reached an agreement, and my agent was in London to listen to their offer,” said the teenage star. "Chelsea is a great option for me. If everything goes well, why not? Leaving Barca hurts, but you have to take your chances."
Email ThisBlogThis!Share to TwitterShare to FacebookShare to Pinterest