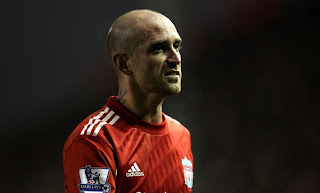 Chelsea boss Andre Villas-Boas is reportedly considering a move for Liverpool’s Raul Meireles as the new Blues boss continues to look to add more creativity to his Stamford Bridge midfield. The West London club have been attempting to lure Luka Modric away from Tottenham but Harry Redknapp and chairman Daniel Levy are sticking by their guns and as a result the Portuguese boss is looking for alternatives. Villa-Boas lost Meireles to Liverpool a month and a half into his tenure at FC Porto and the young Chelsea boss may be ready to make an offer for the 28 year old. The Portuguese international had a solid first season at Anfield but is reportedly a player Kenny Dalglish may look to offload following the arrival of Charlie Adam, Jordan Henderson and Stewart Downing this summer. Meireles experienced a sharp upturn in form when the Scot took over from the beleaguered Roy Hodgson, the high spot in his season being his winner at Chelsea back in February.
Email ThisBlogThis!Share to TwitterShare to FacebookShare to Pinterest