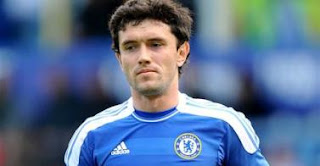 Yury Zhirkov has left Chelsea to sign for Russian Premier League side Anzhi Makhachkala. The move brings to an end a two-year stay in London, during which the Russian made 32 starts and 17 substitute appearances. "FC Anzhi has come to an agreement with Chelsea for transfer of the of Russian national team player Yury Zhirkov to our club. This morning the newcomer to our team, after a medical check-up, signed a four-year contract," read a statement on fc-anji.ru. The 27-year-old told his new club's supporters of his delight in becoming their latest recruit, after being unveiled before Anzhi's league fixture against Tom Tomsk earlier today. "I'm very happy to be here in Makhachkala," said Zhirkov according to Reuters. "I hope to make my Anzhi debut in our next game against Spartak Moscow." The Russia international joined Chelsea from CSKA Moscow in 2009 for a considerable outlay, but after failing to establish himself in the first-team, he has now returned to Russia with the ambitious Premier League side.
Email ThisBlogThis!Share to TwitterShare to FacebookShare to Pinterest