Which playmaker would be the ideal signing? 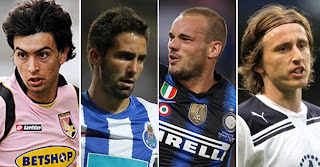 Blues manager Andre Villas-Boas has said there is no rush to move in the transfer market, as he wants to assess the current Chelsea squad before adding any new faces. That is the sensible way to go about, even when it is known that major reinforcements are required in certain positions. One such position is the center of midfield, where many believe the West Londoners are missing a creative influence. Last season served as evidence of this, particularly in matches where the Blues would find themselves trailing by one goal early on. No doubt what was missing was someone with a wide range of passing and ability to unlock defenses. Someone who could produce a moment of magic from the middle of the pitch, be it a spectacular volley or a beautifully threaded through ball for the strikers to finish off. Unfortunately, the current Chelsea midfield lacks a quality playmaker. It would be fair to say that Josh McEachran, who has displayed exceptional ability on the ball, at 18 years of age, is still too young to take the responsibility of creativity on his shoulders alone.

João Moutinho
Moutinho, aged 24, is not as well known as the others on this list. However, he is not short of talent. He is known for his excellent passing and ability to spread play. He is a set-piece specialist, and his shooting is very good, so it's no coincidence that a large chunk of his goals come from long range shots. His sublime touch and his versatility make him one of the best young Portuguese midfielders. He was one of FC Porto's most important figures last season, one in which they won a domestic double and the Europa League. With Andre Villas-Boas moving from Porto to Chelsea, Moutinho has also been linked with a switch to the British capital. But he insists he is happy at Porto and intends to stay on. His buyout clause stands at €40m, so Chelsea may decide against moving for him.

Luka Modric
Modric is just what Chelsea need, someone who can dictate play in the middle of the park and help stamp authority on the game, no matter who the opposition is. Since his move to White Hart Lane in 2008, he has gone on to become one of the best midfielders in the Premier League. Luka has quick feet, good ball control, is a brilliant distributor and possesses excellent vision. He is also one who doesn't shy away from his defensive duties, something that is as a very desirable quality in a midfielder. Being only 25, he has many years of service to offer at the very highest level.

Wesley Sneijder
The Dutchman had his best year in 2010, where he showed his class with both club and country. He is undoubtedly one of the best passers of the ball at present, right up there with Xavi and Iniesta. This man has to be an attractive option for Chelsea, as he scores his fair share of goals too. He is a dead-ball specialist. Like Modric, he too has a low center of gravity, is comfortable playing with both feet and can play a long pass as well as anyone can. His speed, sublime control and eye for a pass make him difficult to deal with. He is a player who rises to the big occasion. At 27, the Dutchman still has some of his best years to come.

Javier Pastore
Pastore reminds me of Kaka in his days at AC Milan. He is quick, skillful and can dribble past opponents as if they weren't there. The 22-year-old Argentine is one of European football's most sought after young players, which is hardly a surprise. He has just enjoyed a stellar season with Palermo, scoring 14 times and grabbing six assists. He has a sweet right foot and can pick out teammates with ease. He can add creativity and flair to any team. He is expected to make a move to a bigger club this summer. According to his club president, Maurizo Zamparini, Chelsea and Real Madrid lead the race for Pastore.
Email ThisBlogThis!Share to TwitterShare to FacebookShare to Pinterest