Villas-Boas unfazed by struggles of Torres 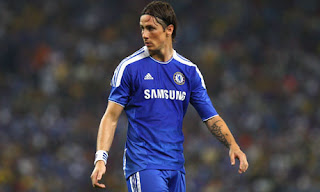 Andre Villas-Boas's tenure as manager is still in its infancy, but already the sense of optimism generated by his arrival is threatening to be doused amid familiar concerns. Today, at the Bukit Jalil national stadium, the Portuguese was to deflect questions about Fernando Torres's lack of bite by urging the watching world to focus instead upon the power of the collective. Torres endured his now customary frustration as the tourists heaved themselves in stifling heat to a scrappy 1-0 victory against a Malaysian XI. The Spain international was denied in the opening two minutes by Mohd Farizal Marlias and, just as at Portsmouth last Saturday, his performance rather fizzled out before the entire team's half-time substitution. It is dangerous to read too much into pre-season fixtures with this in effect a very public training session, but the striker still appears ill at ease and that, in itself, is unnerving.

Andre Villas-Boas said on Wednesday that he did not want there to be an 'obsession' over Fernando Torres’s lack of goals after the £50m striker again struggled to impress for Chelsea. Drogba, as planned, replaced Torres at half-time and later admitted that Chelsea were 'lucky to win'. The pair are yet to play together for the new manager who, understandably, did not want too much read into such an encounter. But having scored only once in 18 games for Chelsea last season, and failed to strike against Portsmouth last weekend, although he did score in a practice match against Wycombe Wanderers, Torres’s apparent lack of confidence is a legitimate concern. There does, however, appear to be a continuing lack of creativity in the Chelsea squad - hence the pursuit of Luka Modric - with Villas-Boas also confirming that he was an admirer of the Belgian striker Romelu Lukaku.