Villas-Boas to ignite interest in Hulk? 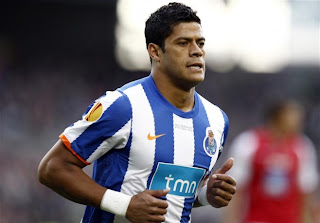 According to sources, Andre Villas-Boas is set to return to his former club Porto and attempt to sign Brazilian striker Hulk. Left out of the Copa America, Hulk is one of Brazil's most wanted forwards: he scored an astonishing 36 goals in 51 games for Porto last season. Villas-Boas was linked to the, soon to be 25 year old, forward when he was first appointed at Stamford Bridge and is about to make a concerted effort to bring the striker to London. Villas-Boas, who is also tracking Tottenham’s Luka Modric, sees both players as the final pieces in the jigsaw to enable Chelsea to challenge on all fronts next season. However, Hulk (full name Givanildo Vieira de Souza) is contracted to the Portuguese club until 2016 and has a staggering €100m buyout clause, which could prove to be something of a small stumbling block (slight understatement).
Email ThisBlogThis!Share to TwitterShare to FacebookShare to Pinterest