Villas-Boas: squad is one of the oldest 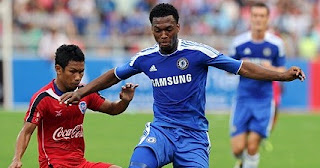 Andre Villas-Boas has acknowledged he has one of the oldest squads in the Premier League and said the club was planning to invest more on youth. The Portuguese coach has already bought Thibault Courtois before loaning the Belgian goalkeeper to Atletico Madrid and agreed terms with another teenager, Barcelona midfielder Oriol Romeu. "The market we have moved in, and the players we have shown interest in, they are of a young age," Villas-Boas told a news conference on the eve of Chelsea's Asia Trophy final against English rivals Aston Villa. "You might see similar moves in the future from us because the squad is old, it's one of the oldest in the Premiership. We respect them and we are happy enough with the quality we have to be able to challenge for the title. But the options we are looking at in the market at the moment are also looking into the future."

Chelsea have a host of '30-somethings' in their squad including skipper John Terry, vice-captain Frank Lampard, strikers Didier Drogba and Nicolas Anelka and defender Ashley Cole. Villas-Boas said he had been particularly impressed with the pre-season form of 21-year-old striker Daniel Sturridge, back with the club after a successful loan spell with Bolton Wanderers last season. "This is the group where he belongs and he has shown the quality he showed at Bolton," said the new coach. "He has a natural ability and amazing physical qualities. He is a great prospect. We will make a decision soon and inform Daniel on his situation but I think he has shown a lot of his qualities and he has shown enough capacity to be in this environment and this squad."
Email ThisBlogThis!Share to TwitterShare to FacebookShare to Pinterest