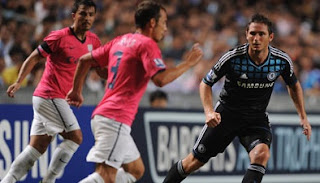 The Portuguese's latest experiment had Frank Lampard reverting to his more defensive England brief for today's outing againsthe Hong Kong champions. Convention is being challenged as the manager spies options within his squad. Lampard was paired deep with Yuri Zhirkov and, briefly, Josh McEachran as a poor Kitchee side were thrashed 4-0. Chelsea's power, with Didier Drogba, Florent Malouda and Yossi Benayoun revelling in an attacking three, may have caught the eye, yet to thrive the system adopted required the deepest two midfielders to push up and distribute at pace. Kitchee never came close to coping. Villas-Boas was at pains to say that the 4-2-3-1 shape is just another option for him to explore away from his more accustomed 4-3-3 but, for the veteran in the ranks, the occasional outing in this new role may actually be beneficial. Last year's groin problems wrecked Lampard's campaign, an experience he has not endured often in his lengthy career. Having the option to sit deeper and dictate play rather than mustering his trademark charges into enemy territory would, possibly, see him retain his freshness.

source: Guardian
Email ThisBlogThis!Share to TwitterShare to FacebookShare to Pinterest