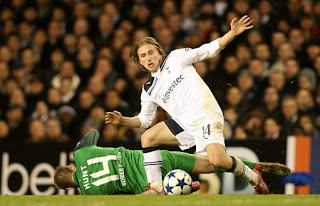 Luka Modric is out of Tottenham’s pre-season friendly with Kaizer Chiefs as Chelsea prepare to launch an improved third, and almost certainly final, bid of around £30m for him. The 25-year-old playmaker has an ankle problem - which the north Londoners insist is genuine. Modric has been at loggerheads with Spurs chairman Daniel Levy for several weeks, demanding to be allowed to leave White Hart Lane for Stamford Bridge. Although the Modric camp say the Croatian has handed in a transfer request, Tottenham insist they have yet to receive one and have remained steadfast in their determination to hold onto their star midfielder. The White Hart Lane outfit insist Modric will start the season as their player. But Modric is equally adamant that he wants out and Chelsea are set to continue their aggressive pursuit of the player with a bid of around £30m within days. The west Londoners are still keen to recruit Modric in time for their pre-season tour of the Far East, which begins on Thursday.