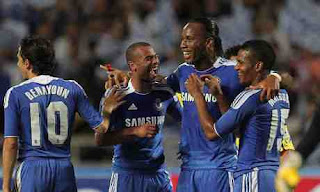 Chelsea continued their tour of Asia with a comfortable success over a Thailand All Stars side in Bangkok. Frank Lampard, Jose Bosingwa, Branislav Ivanovic and Florent Malouda were all on target for the Blues as Andre Villas-Boas retained his 100% record in pre-season. The match had appeared to be in doubt following torrential rain yesterday that left the field soaked, but the conditions were much better today with the sides being greeted by hot and sunny conditions. Villas-Boas gave goalkeeper Petr Cech his first start while Patrick van Aanholt and Fernando Torres also started. Chelsea dominated from the kick off; John Terry saw a header ruled out for offside before Lampard opened the scoring after 37 minutes, the England midfielder slotting home from the edge of the area.

The lead was doubled shortly after the interval as Bosingwa's long-range strike was pushed onto the post and in by home keeper Pattarakorn Tanganurat. The third soon arrived in the 52nd minute as a neat exchange of passes involving Ivanovic and Josh McEachran allowed the former to fire home. Villas-Boas rung the changes with victory effectively assured but there was still time for Malouda to fire home after being picked out by a lovely pass from Mikel.Hilario made a terrific saves in a matter of minutes from Wuttchai Tatong and Leandro dos Santos before Chelsea made eight changes. Villas Boas then sent on youngsters Jamal Blackman, Billy Clifford and Nathaniel Chalobah for the final few minutes.