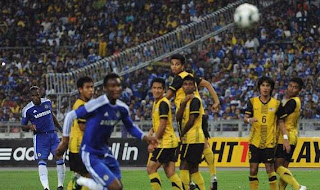 A controversial own goal gifted Chelsea victory over a Malaysia XI, as Andre Villas-Boas' side struggled to overcome the select XI in the national stadium. Having recorded victory over Portsmouth at the weekend - via a Tal Ben Haim own goal - the Blues received another stroke of fortune as goalkeeper Tarmizi Roslan was cruely adjudged to have diverted a free kick over his own goalline. A Malaysia XI had previously shipped 10 goals against Arsenal and Liverpool, but despite defeat they could feel justifiably proud of their performance against last season's Premier League runners-up. Didier Drogba was introduced at half-time as boss Andre Villa-Boas replaced his entire starting line-up. And it was the veteran striker who spared the Blues' blushes 12 minutes from time when his free-kick was adjudged to have crossed the line. The keeper had tipped the ball onto the post, but the rebound fell unkindly for the young shot stopper, and having bounced off of his back and bobbled towards the goalline, with the linesman signalling a goal, with replays proving the ball had not fully crossed the line.