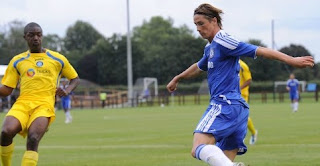 Yesterday afternoon Chelsea hosted Wycombe Wanderers at their Cobham training ground for a 'behind closed doors' friendly. This was the first opportunity for Andre Villas-Boas to get a look at his players in a competitive situation. The new manager was able to pick from a large squad and gave 21 players 45 minutes each (Clifford and Mellis shared the second half). Yossi Benayoun opened the scoring for the Blues very early on, chipping a pass beyond Wycombe keeper Nikki Bull. Didier Drogba could have made it two but for a fine save by Bull. Shortly after the break, Chelsea extended their lead when Fernando Torres, from a Nicolas Anelka through ball, finished from just inside the area. Within five minutes it was 3 - 0 when defender Slobodan Rajkovic, returning from a season-long loan at Dutch team Vitesse Arnhem, volleyed home a Yuri Zhirkov corner. Chelsea had further opportunities when Salomon Kalou hit the woodwork and Anelka was denied by replacement 'keeper Steve Arnold. Three goals, a clean sheet and no new injury worries, wrap a fine first match of the summer. Next up, it's a trip to the seaside and a visit to Portsmouth...