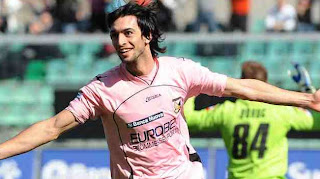 Palermo's attacking midfielder Javier Pastore could soon be on his way to Stamford Bridge after their vice president Guglielmo Micciche told an Italian radio station that the player was "very likely" to join the Blues. The 22-year-old Argentine playmaker has attracted a lot of interest from several major European clubs this summer, but Palermo's reluctance to let him go for less than a reported £39.7m has meant that his future remains unsolved. Pastore won the 2010 Serie A Young Player of the Year award and has already made nine appearances for his country. He helped his side qualify for this season's Europa League by finishing fifth in the league last campaign, with Pastore scoring 11 goals. According to Micciche, negotiations are "well advanced" with Chelsea and so a deal could be completed in the next week. Manchester City and Roma, among other clubs, are also rumoured to be interested in securing Pastore's signature, and they may well make a move to try and halt the Blues' progress. If Pastore's proposed move does go through, it may well mean that Chelsea stop pursuing Tottenham midfielder Luka Modric.
Email ThisBlogThis!Share to TwitterShare to FacebookShare to Pinterest