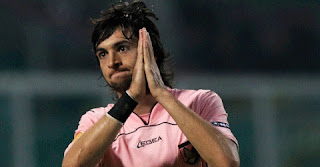 Palermo have confirmed that they have received bids from both Paris Saint Germain and Chelsea for Javier Pastore. Reports emerged over the weekend about PSG's interest and Palermo had already stated Chelsea were keen. Palermo president Maurizio Zamparini said on Wednesday that he felt a deal was just hours away, but director of sport Sean Sogliano has now stated that nothing will be done until Thursday after their Europa League clash with Thun. But Sogliano did confirm that the battle was a two-horse race between Chelsea and PSG. "At the moment we are waiting and will make a decision in the next few days, after tomorrow's Europa League game against Thun. We have received interesting offers from Paris Saint-Germain and Chelsea."