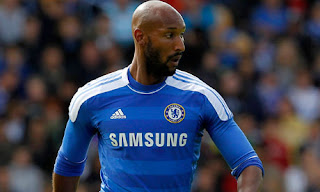 Nicolas Anelka intends to see out the final year of his contract before leaving the club under the Bosman ruling, potentially for Major League Soccer, next summer. The veteran France international, a £15m signing from Bolton Wanderers in 2008, has effectively moved down the pecking order at Stamford Bridge following the £50m arrival of Fernando Torres in January. Yet, despite reported interest from clubs in the United States and the Middle East this summer, Anelka remains intent on impressing André Villas-Boas in pre-season to convince the Portuguese that he should play a part in the first team. While Chelsea are hopeful of securing Didier Drogba, another player entering the final 12 months of his current deal, on a one-year extension to the summer of 2013, Anelka suggested he would not be seeking to open negotiations aimed at prolonging his own spell at the club. "I'm OK with one year," he said. "That's fine for me. I said in the beginning, when I signed, that I wanted to stay until I finished my contract. I still have one more year and I'm happy."