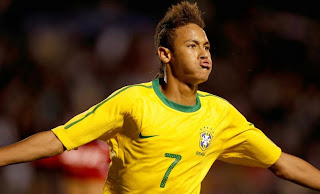 Manchester City and Chelsea target Neymar is going nowhere, according to his club, Santos. The 19-year-old has been linked with a move away from the Brazilian side with Chelsea and Real Madrid said to be favourites to secure his signature, but in a week in which Santos said that five European clubs had pledged to meet the £40 million release clause in Neymar’s contract, club president Luis Alvaro de Oliveira announced that all bets were off and that Neymar would be staying with his club.Neymar is set to appear for Brazil in the Copa America, which starts today in Argentina and Oliveira said that he will return to Santos after the tournament. Last year Neymar was linked with a move to Chelsea but announced he would prefer to remain in Brazil rather than warm the bench of a big European club. This summer it was thought he was set for a move to Real Madrid and that his final act as a Santos player was to score in their 2-1 win over Penarol last week to give them their first Copa Libertadores – the South American championship – since 1963.
Email ThisBlogThis!Share to TwitterShare to FacebookShare to Pinterest