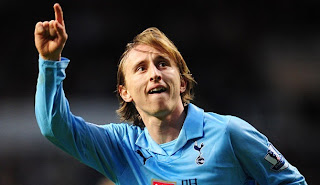 In what has to be the final chapter of this saga, Luka Modric will tell chairman Daniel Levy in the next 48 hours he wants to move to Chelsea this summer. The 25-year-old has been the subject of two bids from the Blues in recent weeks but Spurs are adamant he is not for sale. Levy has claimed Modric will not leave 'at any price' but the club have so far refused to say whether they will offer the player a pay rise to reflect their valuation of him. Harry Redknapp labelled Chelsea’s original £22m as ‘ridiculous’ and stands by his chairman in refusing to sell one of his best assets. Let's be frank: we know that Spurs will take all they can get and they're just playing the game. If Chelsea are to make an improved offer - as been suggested for the last couple of weeks - it has to be a non-negotiable, full and final one. There are mixed views on whether Modric is wanted by the fans or whether he's over valued, especially with escalating stories around Javier Pastore. In any case, this has dragged on too long and we're all getting bored. The Blues owner, Roman Abramovich, has been talking to Modric’s agent on his yacht in Dubrovnik. Perhaps there's and end in sight?
Email ThisBlogThis!Share to TwitterShare to FacebookShare to Pinterest