Missing out on Neymar is no big deal 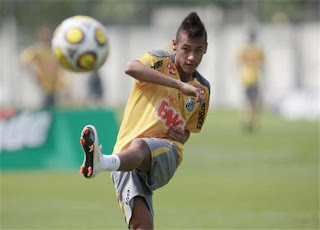 Since last year the rumors about the young Brazilian sensation Neymar, have had him set for a move to Stamford Bridge. With the offensive tactics of Andre Villas-Boas now commanding the club, the speculation has only intensified. The skill and creativity in his play would attract defenders and open up runs for Torres as well as create more space for Lampard to be more involved in the final third. After two long years it looks like Chelsea will lose out on the young prodigy, as recent rumors have the Spanish giants Real Madrid the front runners to sign him. The Spanish newspaper Marca reports that the 19 year-old personally prefers Los Blancos. In a conversation he had with Brazilian team mate Dani Alves, Neymar said "I do not know anything about Barcelona. Next year I want to play for Real Madrid." There are plenty of reasons to sign him, but there are also reasons why not to. He is young, extremely talented and certainly has a bright future in the game. All of this comes with baggage that, some might say, make his absence better for the club overall...

Neymar seems to have an attitude.
In his short professional career he has already won the league, the league cup, and Copa Libertadores. He has also achieved numerous individual awards including the Brazilian Golden Boot in 2010. But he has also had altercations off the field. In September 2010, Neymar was fined for a spat he had with Santos coach Dorival Junior. The incident occurred after a 4-2 win and was reportedly over the coach's refusal to allow the 18-year-old to take a penalty kick. The coach then went on to express his concerns over the youngster's attitude. To make matters worse, the club ultimately decided to sack the coach and back their young superstar. In this year's Copa America, Neymar got into a scuffle with Venezuelan coach Cesar Farias in the tunnel at half time. Chelsea have dealt with egos in the past, but they have always been from proven players. With a new coach, the last thing Chelsea needs is a youngster to split the locker room.

He dives too much
For years Chelsea fans have laughed at the dramatic expressions of Cristiano Ronaldo hitting the turf in the most thespian of fashions. Then his accompanying arms raised and wide-eyed sigh completed an act that has made him one of the biggest divers in the game today. The problem is that Neymar may be even worse than that. He seems to be so used to getting every call he wants that if he were to come to England he may not be able to adapt to the concept that only the hardest of tackles will be called. Part of the reason Neymar gets a majority of calls in his favor now is because he is the superstar of the league. At Chelsea he may not even be a starter, let alone a player of huge consequence. Referees would not give him the benefit of the doubt simply because he has not earned it.

Brazilians don't always adapt well
The Premier League has long been one of the strongest leagues in the world. Players, managers, and teams receive more criticism and are held under the microscope more than other leagues. This is a recipe that generally does not suit Brazilian's very well. Their Joga Bonito attitude toward the game and life, does not match up with the high publicity and pressure they face on English squads. The media rules opinion there and if they decide to turn on you can make the entire country your enemy. Robihno is a perfect example of the conflicting nature of the two leagues. He excelled at his time in Santos then at Real Madrid. At Manchester City he played well, but was not quite able to be the player he was used to being. He just was not able to be on the ball long enough to do his thing. Neymar plays a very similar style to Robinho. The magic that he does is all done when the ball is at his feet. His dribbles, passes, and shots are what has made him the most valued young commodity today. If he were to come to England, he may not be able to adapt and become a performer off the ball. If he cannot he will suffer the same difficulties as Robinho.

He is too expensive
Chelsea have reportedly offered £22m for Luka Modric and £27m for Falcao; proven players, who have shown that they can play on the biggest stages in Europe. Players like these may have reached the peak of their career, but you know what you are paying for with them. Neymar may be an early bloomer and not far off from his full potential. To put it in further context, Manchester City value Carlos Tevez at £50m after his recent statements about wishing to leave the club. You would be hard pressed to find many who would say the contributions of Tevez on and off the field are only worth £10m more than Neymar's. If Chelsea were to meet the release clause set by Santos, it could make it difficult to improve in other areas, such as midfield depth. There are plenty of superstars and goal scorers on the team. There is also some good youth coming through the academy. It just does not seem practical to break the bank on a gamble like this when it is not necessary.
Email ThisBlogThis!Share to TwitterShare to FacebookShare to Pinterest