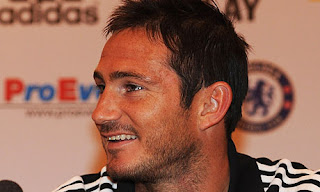 Frank Lampard said yesterday that Chelsea were unconcerned about the 'fortunes' that have been spent by Manchester United and the other Premier League title contenders this summer. Arriving in Malaysia, ahead of a two-week Far East tour, the midfielder claimed that Chelsea would be 'very strong' in the forthcoming campaign regardless of what their title rivals did. With United having acquired Ashley Young, Phil Jones and David de Gea, and in pursuit of Wesley Sneijder, Chelsea have, so far, been largely unsuccessful in attaining their high-profile targets. They have missed out on Neymar and Alexis Sanchez and face a real battle, and a third bid of more than £30 million, in trying to prise Luka Modric from Tottenham Hotspur. Roman Abramovich is yet to be convinced that Scott Parker needs to be signed permanently for £8 million rather than loaned. Manchester City may also rival them for the signature of Anderlecht’s Romelu Lukaku. Andre Villas-Boas has brushed aside concerns over the lack of transfer activity and reasserted that he will use the next fortnight to properly evaluate what he has available to him before making any significant moves.
Email ThisBlogThis!Share to TwitterShare to FacebookShare to Pinterest