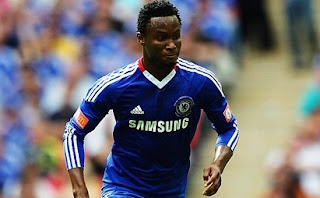 Italian giants Juventus are interested in bringing Chelsea midfielder John Obi Mikel to Serie A. The 24-year-old is the target of a £15 million bid from the Old Lady, according to reports in the Italian media. New Chelsea boss Andre Villas-Boas is said to be happy for the Nigerian international to leave at the price. Juve plan to team the Blues midfielder with veteran AC Milan star Andrea Pirlo. Mikel would play the role of defensive enforcer alongside the World Cup-winning playmaker. The sticking point for the Italian club could be Mikel's lack of an EU passport. Serie A sides are only allowed to sign one new non-EU player from a club outside Italian football, and signing Mikel could limit their transfer activity for the rest of the summer.
Email ThisBlogThis!Share to TwitterShare to FacebookShare to Pinterest