Frank Lampard will adapt his game 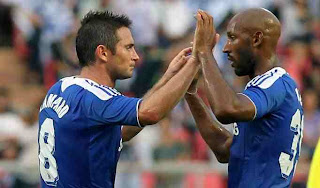 Frank Lampard is more than happy to change his style of play for his team in order to bring out the best in the Chelsea squad. The dynamic midfielder was speaking after the Blues' impressive 4-0 win over the Thailand All Stars yesterday. "I think I can play right and play different ways," said Lampard. "Of course you do adapt your play depending on who is around you. It depends on the discipline of the players around you, the type of players they are. If they are more attacking players like a Malouda you maybe play a bit deeper. You just have to adapt by seeing the qualities of the other players there." Chelsea boss Andre Villas-Boas has so far been cautious during this summer's transfer window, so Lampard may well have to bring out the talents of some of Chelsea's younger players. Lampard praised the 18-year-old upstart Josh McEachran, who recently signed a five-year deal to stay at Stamford Bridge, after a promising start by the young player who may one day fill Lampard's role as an attacking midfielder for the Blues.
Email ThisBlogThis!Share to TwitterShare to FacebookShare to Pinterest