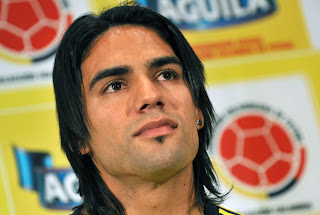 Chelsea’s hopes of signing Porto striker Falcao were given a major boost this evening as he spoke of his dream to play in the Premier League. Colombian international Falcao has a release clause of £27 million which, according to Porto, is not for negotiation. Real Madrid are also interested but Falcao, who excelled last season at Porto under Andre Villas-Boas, has indicated his desire to team up again with his former manager. Falcao scored 33 goals last season and believes he is ready to step up to both the Premier and Champions League. Porto are keen to ensure Villas-Boas does not raid the club in the same way that José Mourinho did when he moved to Stamford Bridge in 2004, taking Paulo Ferreira and Ricardo Carvalho with him. Falcao's strike partner Hulk, who scored 23 league goals last season, has also been linked with a mega-money move to Stamford Bridge, although the figures suggested are ridiculous.