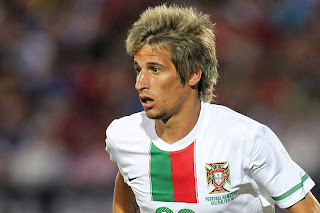 Chelsea's hopes of landing Fabio Coentrao have been boosted after it was revealed that Real Madrid's move for the Benfica defender is in tatters. Jose Mourinho was set to sign the left-back for a fee of about £21million but complications delayed the deal and now Benfica chairman Luis Filipe Vieira has told Madrid to trigger the defender's £25m release clause or forget it. But it is unclear whether Madrid want to pay the full amount, especially having previously agreed a lower fee for the player. Now new Chelsea manager Andre Villas-Boas wants the 23-year-old - and the confusion with Real Madrid could allow him to snatch Coentrao from under the nose of his former boss Mourinho. Although Villas-Boas already boasts Ashley Cole in his squad, it is understood that he wants to sign his compatriot Coentrao because of his versatility in defence and midfield.

source: News of the World
Email ThisBlogThis!Share to TwitterShare to FacebookShare to Pinterest