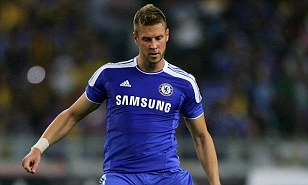 Chelsea's interest in Scott Dann depends on whether the Blues can get a work permit for Serbian defender Slobodan Rajkovic. Rajkovic was signed by Chelsea from Serbian club OFK Belgrade in 2007 and has since been loaned out to PSV Eindhoven, FC Twente and Vitesse Arnhem. He has now returned to Stamford Bridge and played an active role in the Blues' pre-season tour. The 22-year-old is very highly rated by new Chelsea boss Andre Villas-Boas but he does not as yet have a UK work permit. It is understood if the Blues manage to get one for him, they will not spend any more money on centre-halves. However, if they fail to get the work permit, Birmingham City's Scott Dann is a targets that the Stamford Bridge outfit are closely monitoring having studied the player and watched him in pre-season. Liverpool are also keeping a close eye on Dann - who was born on Merseyside and is a lifelong fan of the Reds - but it is understood they would need to off-load players first before making their interest formal.