Nicolas Anelka set to be 'offered for transfer' 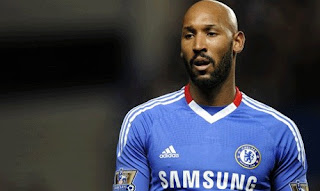 Chelsea striker Nicolas Anelka is reportedly set to be the first player to leave Stamford Bridge under new manager Andre Villas-Boas. Reports suggest that Villas-Boas is looking to buy another striker before Chelsea leave for their Far East tour, with Porto’s Falcao amongst the top targets. The Blues also plan to snap up highly-rated Anderlecht youngster Romelu Lukaku. That would leave Chelsea with a surplus of forwards and it has been rumoured that Didier Drogba would be sold to his former club Marseille. With this move looking unlikely, it seems that 32-year-old Anelka may be the one in the firing line. Whatever happens, it would appear that Anelka’s days as a Blue are numbered anyway, as the Portuguese manager favours a 4-3-3 formation, something that does not suit the French striker. It is thought Paris Saint-Germain is Anelka's most likely destination, as the club he has enjoyed previous spells with have recently been taken over by a Qatari investment fund and have a huge transfer budget.
Email ThisBlogThis!Share to TwitterShare to FacebookShare to Pinterest