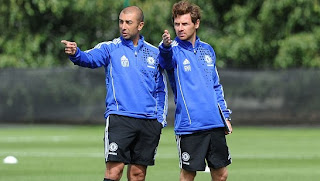 A glance across Chelsea's lush green training facility in the wealthy Surrey area of Cobham this morning, and one could be forgiven for thinking one of the players was dressed in the wrong kit. But look closer at the dashing young gentleman in the blue pullover barking orders, and it becomes apparent that he isn't just another player, but in fact the 33-year-old Portuguese manager who is charged with keeping united one of most powerful dressing rooms in the Premier League. Andres Villas-Boas took his team of experienced internationals, title winners and Champions League finalists for training for the first time today. And so far, so good. Questions have been raised about how a former manager's assistant would handle the the likes of Didier Drogba, John Terry and Frank Lampard, some of whom Villas-Boas would have shared a classroom with had they gone to the same school. He comes with pedigree, certainly, but Carlo Ancelotti, a man with a decade in management at the very highest level, and a stellar playing career to boot, struggled to maintain the respect of those on the field after the first bump in the road.