Chelsea in for Walcott amidst Wenger doubt 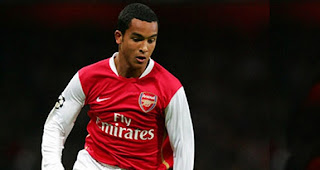 Chelsea are about to add further misery to Arsenal's summer by launching a bid for Theo Walcott. With the unsettled Samir Nasri looking like he's heading to Manchester City along with Gael Clichy, and Cesc Fabregas looking certain to join Barcelona, the loss of a fourth key player would be a body blow at the Emirates. The winger has an uneasy relationship with Wenger mainly because he feels he has not been given the first-team opportunities this year and paid the price in the final sprint. But the bad news has not stopped manager Arsene Wenger committing his future to the club, as he insisted he was trying hard to bring in new players. But Wenger has been linked to Paris St-Germain, who have been bought by Qatari Sports Investment, and has made no secret of his desire to return one day to his home town of Strasbourg and help the ailing club. The Frenchman, who came in for criticism last week as the prospect of losing midfielders Fabregas and Nasri and defender Clichy grew more likely, urged Gunners fans to be patient over the club's transfer strategy. 'I'm very happy at Arsenal,' said Wenger. 'One sign of intelligence in life is to not always to want what you don't have. Appreciate what you have.'