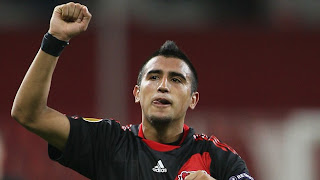 Chilean midfielder Arturo Vidal is hot property as Chelsea are keen on snapping him up from Bayer Leverkusen. The 24-year-old has been linked with an exit from the Bundesliga side, and Chelsea could look to snap him up after Michael Essien's anterior cruciate ligament tear. However, the Barclays Premier League side will have to fight off interest from Juventus, who are also keen on the player, with Bayer Leverkusen managing director Wolfgang Holzhauser admitting that talks are in progress with the Serie A side. But Andre Villas-Boas’ side have now expressed interest in signing the 24-year-old, who netted 10 goals for the Bundesliga runners-up last season. He is valued at £12million, with 30 per cent of any fee due to go to his former Chilean club Colo-Colo.
Email ThisBlogThis!Share to TwitterShare to FacebookShare to Pinterest