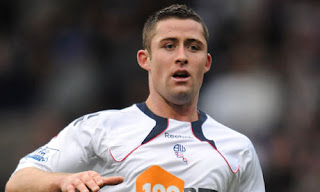 Chelsea are reportedly considering a move for Bolton defender Gary Cahill following reports that his move to Arsenal has stalled. As reported yesterday, Cahill's £17m move to Arsenal appears to be in trouble after Bolton boss Owen Coyle rejected the chance to sign Nicklas Bendtner as part of the deal. And new Chelsea boss Andre Villas-Boas has made signing a British central defender one of his top priorities this summer, with Cahill and Birmingham defender Scott Dann reportedly top of his shopping list. The development comes following reports in Spain last month that Chelsea could sell David Luiz to Barcelona, which would leave the Blues in need of a quality replacement. Dann has previously been linked with a move to Liverpool as well as Arsenal. But interest in the 24-year-old appears to have cooled recently as a result of Birmingham's high asking price, which could be as much as £14m. The 24-year-old has proved to be a massive success at St Andrew's and he has established himself as one of the best young defenders in the country.