Why Wesley Sneijder should be first choice 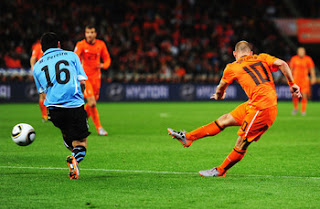 As Guus Hiddink will most likely be returning to London as Chelsea manager, the club must look to make key acquisitions during the summer transfer window. After a trophy-less season, owner Roman Abramovich is determined to bolster the current squad. With Liverpool and Manchester United already confirming key signings, the Blues must move quickly to land some of their marquee targets. Chelsea have been heavily linked with Tottenham midfielder Luka Modric and Palermo playmaker Javier Pastore in recent weeks. Although the Blues have an abundance of talent in the attack and defense, the club lacks a traditional No. 10 in midfield. While the aforementioned players would be great additions, Abramovich should be willing to fight Manchester United for Internazionale's midfield maestro. Dutch international Wesley Sneijder should be top of the Blues' summer shopping list.

Here are five reasons why the playmaker should be Chelsea's top priority:

Range of Passing
With the ball at his feet, Inter's Wesley Sneijder is a serious threat from midfield. The Dutchman boasts exceptional passing range, as he can play the short one-two's and hit the long diagonals as well. Sneijder's ability to spread the play gives the team more width and space in the final third. Although the Inter star can hit the raking cross-field pass, he also combines well in the middle of the pitch. Sneijder has the ability to find the killer through-ball, with the skill and vision to see a pass through multiple defenders. While Chelsea stars such as Florent Malouda and Frank Lampard are accomplished passers, the Dutch World Cup star would provide that exceptional range of passing from an attacking midfield position. Sneijder would give the manager a natural playmaker that can play in behind the strikers.

Ambidexterity
Sneijder distinguishes himself from the majority of playmaking midfielders with his ambidexterity. The Dutch World Cup star can pass and shoot with both feet, making him one of the most dynamic players at the position. Sneijder's ability to spread the ball with either foot opens up significantly more passing angles. The Inter maestro can see and hit through-balls that other playmakers would not attempt. The Dutchman's ambidexterity is key to the team's buildup play as well. Sneijder dictates the passing tempo and rhythm, using both feet to keep possession and relieve pressure from tight spaces. Although the Dutchman has earned rave reviews for his expansive passing, his ability to shoot with both feet makes him a serious dangerman from in and around the box. With his superb technique, Sneijder can use either foot to strike the ball with power and accuracy.

Shooting Ability
The Inter maestro's shooting ability makes him an elite talent at the attacking midfield position. Sneijder can score from the run of play and set pieces. The Dutchman boasts a fierce shot, striking through the ball with real venom and pace. In addition to his powerful shooting, the Inter maestro has great accuracy from in and around the box. The Dutchman has become one of the most feared long-range shooters in the world, with his ability to strike from distance with either foot. Sneijder has the quickness to manufacture his own shot and the technique to test opposing goalkeepers. The Inter star is a goal-scoring threat from dead-ball situations as well. Sneijder has a great dynamic on his free-kicks, with the power and curl to get over the wall, under the bar and past the keeper. Although Pastore and Modric have good shooting technique, Sneijder is significantly more dangerous from distance.

Creativity
In addition to his shooting ability, Sneijder boasts great creativity from midfield. Although the Dutchman may not have the flair and inventiveness of Javier Pastore, the Inter star is a clever player on the ball. Sneijder has exceptional vision, seeing acute angles and tight openings. The Dutchman's ingenuity and eye for the pass makes him a dangerous creative threat for club and country. With his ability to find killer through-balls from anywhere on the pitch, Sneijder has emerged as one of the top playmakers in the world. The Inter No. 10 is not the type of attacking midfielder to beat defenders on the dribble with pace and flair. Instead, Sneijder uses his quickness and strength to make space and find the incisive pass. Malouda has become the main creative threat for Chelsea in recent seasons. However, the Frenchman is more comfortable playing out on the left than through the middle. The Dutchman is the attack-minded, creative threat that Chelsea having been lacking in the middle of the pitch.

Strength and Mentality
Although small in stature, Sneijder is a strong, tough and quick attacking midfielder. Standing at 5'7'', there are major concerns over the player's ability to succeed in the physically demanding EPL. However, the Inter maestro has good strength and rarely gets shrugged off the ball. While Sneijder does not have the blistering pace to worry defenders, he is quick in tight spaces. The midfielder has good agility and creates separation from markers with his short bursts of speed. Although Pastore has the technical skill to excel in a Chelsea shirt, he does not have the physical strength to cope with the English game. Stronger defenders can knock the Palermo midfielder off the ball. While Pastore may be the more natural and graceful playmaker, Sneijder is better suited for the EPL. The two Italian-based players would take time adjusting to the pace and physicality of England's top-flight. Modric, on the other hand, has already proven that he can handle the tough-tackling style of play. The Croatian's EPL experience could push him above Sneijder on Chelsea's summer wish-list. However, in addition to the Dutchman's passing, shooting and creativity, the Inter star has rare intangibles. Sneijder plays with a distinct hunger and determination to win. Although his emotions can get the better of him, the midfielder displays a strong winner's mentality. The Dutchman's drive and desire would be welcomed at Stamford Bridge.
Email ThisBlogThis!Share to TwitterShare to FacebookShare to Pinterest