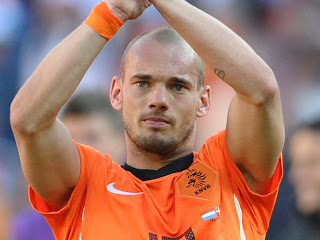 Wesley Sneijder has pledged his future to Inter Milan despite reports linking him with a move away from the San Siro this summer. The Holland international is a reported target of Chelsea and both Manchester clubs. "There is a family atmosphere at Inter and there are all the ingredients to aim high," said Sneijder on the club's official website. "Milan is marvellous, picturesque and full of elegance. I love it. At the moment I am very happy here and I don't see why I should leave." The 27-year-old playmaker joined Inter from Real Madrid in 2009 and helped the Nerazzurri win the Champions League, Serie A and Coppa Italia in his first season in Milan.
Email ThisBlogThis!Share to TwitterShare to FacebookShare to Pinterest