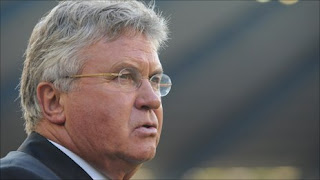 The Turkish Football Federation has accepted that Guus Hiddink is likely to leave his job as national team boss and return to Chelsea. According to a senior source at the TFF, the Dutchman "can't say no to Chelsea, we believe he wants to leave". Hiddink, 64, led Chelsea to an FA Cup victory as caretaker manager in 2009. Despite an indifferent qualifying campaign, Turkey remain in contention for a Euro 2012 play-off place after a 1-1 draw against Belgium on Friday. But Hiddink is unhappy that the man who brought him to Istanbul, TFF chief Mahmut Ozgener, is likely to be replaced following presidential elections on 28 June. The TFF is yet to receive a formal approach from Chelsea asking for permission to talk to Hiddink but fully expect one this later week. FULL STORY
Email ThisBlogThis!Share to TwitterShare to FacebookShare to Pinterest