Sturridge: not going for less than £20m 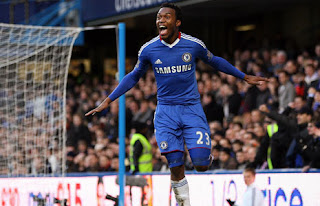 Chelsea want to keep England Under-21 starlet Daniel Sturridge – and are slapping a staggering £20million price tag on his head to deter bids. The young hotshot showed up his bosses by scoring a flurry of goals on loan at Bolton, with Owen Coyle among the managers hoping to buy him now. Sturridge, 21, was a ­bit-part player under Carlo Ancelotti but could be earmarked for big things when the Italian’s successor is unveiled at Stamford Bridge. He is desperate to be given a decent crack at making the Chelsea first-team, but admits that his taste of Premier League action at Bolton means he may have to move on – if he is kept on the fringes again by the Blues next season. Wanderers have asked about Sturridge – both on loan or to buy – while managerless Aston Villa are also attracted, and both Liverpool and Tottenham are watching developments.

source: The People
Email ThisBlogThis!Share to TwitterShare to FacebookShare to Pinterest