Rodwell on radar for London rivals? 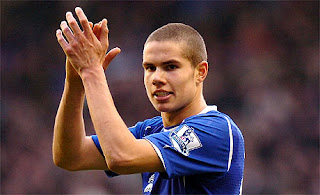 Everton midfielder Jack Rodwell will be the next English star in the middle of a mega-money battle as Tottenham Hotspur and Chelsea confirm interest in the youngster. The 20-year-old has been linked with moves to Manchester United, Arsenal and Manchester City but so far the Merseyside club have blocked all moves to sign him. Both Spurs and Chelsea missed out on Blackburn Rovers defender Phil Jones to Manchester United, and may now move to sign Jones’ England U21 team-mate. Roman Abramovich is keen to reduce the age of his squad and the acquisition of the Everton academy product will fit his new transfer policy. The Blues have targeted other youngsters such as Anderlecht’s Romelu Lukaku, Ajax’s Christian Eriksen and Kevin de Bruyne of Genk.