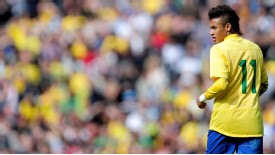 Robinho believes Brazilian sensation Neymar needs to think hard about his future to make sure that he joins ''the right team'' when he leaves Santos. Robinho's words will mean a lot to a player who has followed a similar career path, as the former British record transfer did not enjoy spells at Real Madrid and Manchester City before settling at AC Milan. Neymar, 19, has been likened to Robinho in playing style and is attracting the interest of Barcelona and Chelsea, as he looks set to leave Brazil this summer. However, Robinho has imparted some advice that suggests the young starlet - and fellow Santos midfielder Paulo Henrique Ganso - avoid the Premier League altogether.
Email ThisBlogThis!Share to TwitterShare to FacebookShare to Pinterest