Ray Wilkins to return with Hiddink 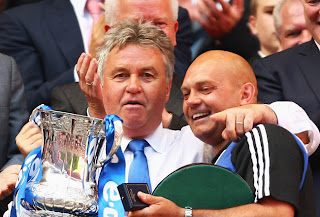 In a shocking turn of events, the man most likely to become Chelsea's next manager, Guus Hiddink, is said to have asked for the reinstatement of Ray Wilkins as the Blues' assistant coach. No reason was given for Wilkins' departure, but rumours of a falling-out between the Chelsea legend and chief executive, Ron Gourlay, may have led to Abramovich's shocking decision. Other suggestions include a training ground bust-up 'behind-the-scenes', but still nothing confirmed. Carlo Ancelotti was not happy with the dismissal of his right-hand man and Chelsea's torrid run of form strangely coincided with the former captain's departure. Hiddink, who worked with Wilkins during his first spell at the club, reportedly now wants Abramovich to give a full pardon and welcome Ray back with open arms. Hiddink has a close personal relationship with the Russian billionaire, and if anyone can get Wilkins' job back then it is the Dutchman, whose new position as Chelsea's boss is likely to be announced any day now. A partnership between Wilkins and Hiddink would no doubt be popular with both players and fans. We have it on good authority that Ray Wilkins would love the opportunity to return and rekindle the working relationship he has with the West London club.
Email ThisBlogThis!Share to TwitterShare to FacebookShare to Pinterest