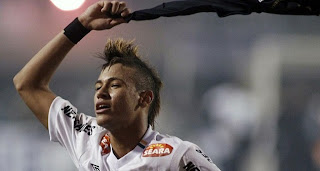 Chelsea target Neymar scored as Santos won the Copa Libertadores in what could be his final match before joining Andre Villas-Boas at Stamford Bridge. Agent Pini Zahavi has travelled to Brazil on Chelsea's behalf but Real Madrid have outlined a £5m-a-year deal. But it was a fine way for Neymar to sign off at his hometown club, with Santos clinching South America's equivalent of the Champions League with a 2-1 win over Uruguayan side Penarol. Santos coach Muricy Ramalho is hoping both Neymar and fellow young star Paulo Henrique Ganso choose to stay with Santos for an encounter with Lionel Messi and Barcelona in the Club World Cup at the end of the year, but it will be hard for both club and player to resist the huge transfer offers from Europe. Since emerging as teenagers a couple of years ago, Neymar and Ganso helped the club win the Brazilian Cup in 2009 and back-to-back Sao Paulo state championships in 2010 and '11. The Copa Libertadores was the major title missing. Neymar will now will travel to Argentina to join the Brazil squad preparing for the upcoming Copa America, where the Selecao will be aiming for a third straight victory in the continental championship