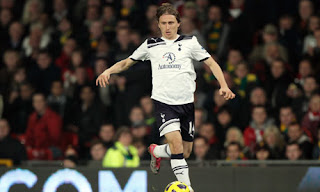 Luka Modric has told Tottenham Hotspur that they do not match his ambitions and admitted for the first time that he would like to join Chelsea. Despite Tottenham rejecting a £22m bid from Roman Abramovich, on Wednesday, for the Croatia midfielder and Harry Redknapp saying the 25-year-old is not for sale, Modric has broken rank to try to force his dream move through. The midfielder took the stunning decision to declare his reasons for wanting to join Chelsea, who are preparing a second offer for the Croat in the next 48 hours. It is an action that will enrage his employers and Spurs supporters, but Modric says he wants to move to a club with ambitions of winning the Barclays Premier League title and is going public to force the issue.

He said: "I would like to go to Chelsea. A lot of players would like to go there and play for Chelsea because it is one of the best clubs in the world, and so do I. I would like to play there. But we will see what will happen. Chelsea are a great club, they play in the Champions League every year, they have great players, they are ambitious and have an ambitious owner who wants to invest in the club and make it win the Champions League, the Premier League and other titles." Modric admitted in interviews with the Daily Mail and Daily Telegraph that Tottenham's failure to qualify for the Champions League, which they played in last season, had caused him to look elsewhere.

The news will explain why Manchester City and Manchester United have been monitoring and talking, rather than formally bidding. They have clearly got wind of Modric’s desire to stay in London, which puts Chelsea in pole position. Spurs fans will expect Levy to offer Modric a new contract and keep his word. The chairman has said that he will not allow the player to go, while manager Harry Redknapp described the original Chelsea offer as ‘ridiculous’. A second Chelsea offer is due - and this time the price will rise from their opening £22million bid to closer to £30m.
Email ThisBlogThis!Share to TwitterShare to FacebookShare to Pinterest