Milan set to bid for Drogba 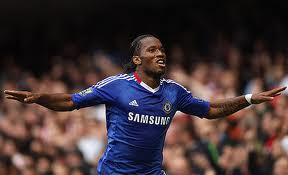 Reports today suggest that Chelsea striker Didier Drogba will be the subject of a bid from AC Milan this summer. It has been reported that the Ivorian is surplus to requirements at Stamford Bridge, although it was also being reported earlier this week that Drogba was set to stay at Chelsea while his strike partner Nicolas Anelka was to move on. Italian press reports suggest that Milan’s sporting director Adriano Galliano met with the club’s owner Silvio Berlusconi and the two have put the 33-year-old Chelsea striker at the top of their list of targets. Despite Drobga’s age – 33 – Milan are believed to be prepared to bid as much as £11 million; however, he may find himself down a pecking order that includes Zlatan Ibrahimovic, Robinho and Alexander Pato. The Italian champions are lining up a bid for Manchester City’s Emmanuel Adebayor if their bid for Drogba fails.
Email ThisBlogThis!Share to TwitterShare to FacebookShare to Pinterest