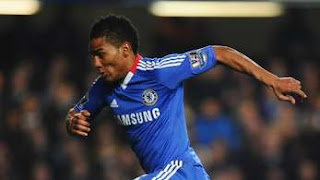 After several lacklustre performances, Florent Malouda could be the first player to be cleared out by new manager Andre Villas-Boas. The Portuguese is set to be unveiled at Stamford Bridge to the media on Wednesday morning, and has already made plans on how he wants to cull the current Chelsea squad. Malouda may lead the exodus from the London club, with the Frenchman likely to end up in Italy. This has pricked interest from AC Milan, Inter Milan and Roma, who are all keen to snap up the winger, who was also Chelsea's top scorer with 13 goals in the Premier League last season. Apart from Malouda, Nicolas Anelka could also be surplus to requirements by the Europa League-winning manager. However, despite reports linking Michael Essien with a move to either AC Milan or Jose Mourinho's Real Madrid, Chelsea have remained adamant that their star defensive midfielder will not be leaving for new pastures anytime soon.
Email ThisBlogThis!Share to TwitterShare to FacebookShare to Pinterest