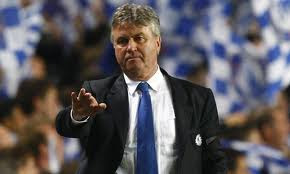 Guus Hiddink and not André Villas-Boas was Roman Abramovich's first choice to become Chelsea's new manager, according to the Dutchman's agent, Cees van Nieuwenhuizen. The Portuguese coach was appointed last week by Chelsea, with a £13.3m fee paid to Porto to secure the 33-year-old's release. Van Nieuwenhuizen, whose version of events is disputed by senior Chelsea sources, said that Hiddink was approached first, but that his client's determination to honour his contract as Turkey's coach prevented him from returning to Stamford Bridge. Hiddink told Abramovich he intended to stay loyal to Turkey until qualification for next summer's European Championship was achieved, and Chelsea respected his wishes "because of the good relationship Guus has with Abramovich", according to Nieuwenhuizen.

source: The Observer
Email ThisBlogThis!Share to TwitterShare to FacebookShare to Pinterest