Emenalo set for Director of Football 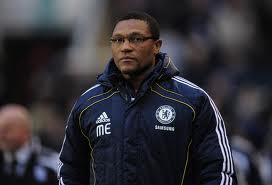 Chelsea are poised to revamp their backroom staff and promote Michael Emenalo as their new director of football. Emenalo, a surprise appointment as assistant manager to Carlo Ancelotti last season, is the man who is now set to replace Frank Arnesen, who moved to Hamburg at the end of last season after Guus Hiddink opted to see out his contract with Turkey. Emenalo, a 45-year-old Nigerian, was previously the chief scout at Stamford Bridge. While Emenalo sat near Ancelotti in the dug-out, the Italian appeared far keener to consult Paul Clement rather than the ambitious African, whose experience of top level football is extremely limited. With new manager Andre Villas-Boas having started work this week, Chelsea are beginning a process of changing their off-field set-up with physical trainer Jose Mario Rocha and opposition scout Daniel Sousa coming with from Porto and other appointments expected.
Email ThisBlogThis!Share to TwitterShare to FacebookShare to Pinterest