Chelsea ready to bid for Modric ...with Drogba part of the deal 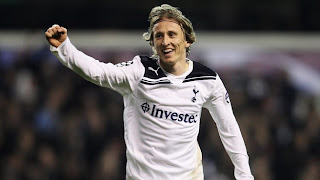 Chelsea are ready to up the ante in their pursuit of Tottenham's Luka Modric with the Blues prepared to offer the playmaker £130,000 a week – nearly triple his £50,000 salary at White Hart Lane. Spurs have stressed their desire not to sell Modric but Chelsea are reportedly ready to test their resolve by throwing in Didier Drogba as a makeweight to any deal. The west London club ended last season without a trophy and are looking to add creativity to their squad, with the £30million-rated Croatian the top target along with a full-back and a winger.An insider said: 'Not having a manager yet won't slow anything down. 'There's a hitlist of players to sign and Modric is right at the top of it.' The 25-year-old has three years to run on his current deal at White Hart Lane but has not ruled out a move away, stating his desire to continue playing in the Champions League after featuring prominently in the club's European run last season.