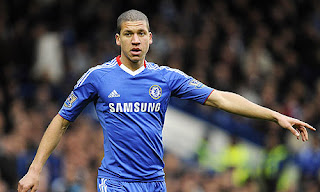 Chelsea's 19-year-old Dutch defender Jeffrey Bruma has joined Hamburg on an initial one-year loan. The Dutch international also has an option for a further year. Hamburg sporting director Frank Arnesen played a key role in the move, just a few weeks after taking up his new role having left a similar post at Chelsea. Bruma, who is under contract at Chelsea until 2014, will link up with former Blues team-mates Michael Mancienne, Jacopo Sala and Gokhan Tore. Bruma joined Chelsea's youth set-up from Feyenoord as a 15-year-old in 2007. He made his first-team debut in late 2009 and has since made nine appearances for the club. The centre-back still believes he can return to Stamford Bridge to challenge the likes of John Terry, David Luiz and Alex for a place in Andre Villas-Boas' side.
Email ThisBlogThis!Share to TwitterShare to FacebookShare to Pinterest