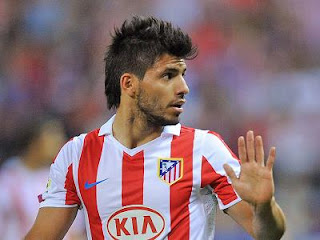 Apparently, Chelsea last night launched a huge £50m bid to sign Atletico Madrid goal ace Sergio Aguero – after it was revealed the player was close to joining Juventus. The Blues’ dramatic move for Aguero, 23, comes as Atletico coach Gregorio Manzano warned ­mega-bucks Manchester City – who are also ­interested in the Argentina striker – to make an offer or face the prospect of having to meet his £45m release clause. Chelsea’s bid is intended to blow everyone out of the water. If accepted it would mean that chairman Roman Abramovich has spent £100m on strikers this year, following on from his £50m capture of Fernando Torres, 27, from Liverpool. Aguero, who has netted 74 goals in 175 appearances for Atletico, sparked a transfer frenzy earlier this month when he announced he wanted to leave the Vicente Calderon.

Aguero looked set to snub a move to the Premier League in favour of Serie A and Juve – but the player is now reconsidering his options after the stunning offer from Stamford Bridge. His arrival in west London would cast serious doubt over the future of Chelsea’s other strikers. Didier Drogba, 33, has been linked with Spanish club Malaga after a season plagued by injury. If Drogba stays, Frenchman Nicolas Anelka, 31, could be heading for the exit door to make room for Aguero and Torres. The plot thickens even further with the return of Daniel Sturridge, 21, from a loan spell at Bolton, where he scored eight goals in 11 games for the Trotters.